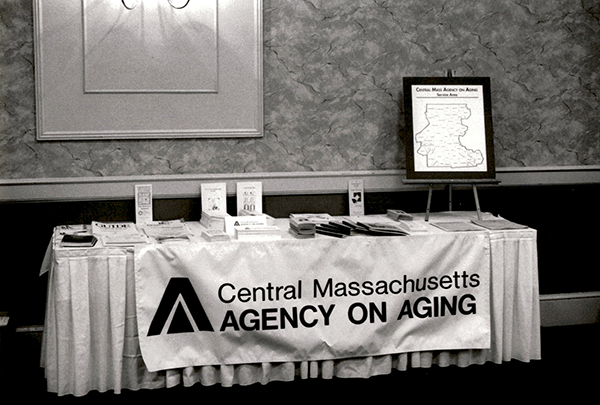 In September of 1974, supported by legislation amending the Older Americans Act of 1965, a new organization was formed to plan and allocate funds under Title III of the Act. This organization, at the time named Region II Area Agency on Aging, had as its mission to bring services to older Americans in the Worcester County region. With offices in Holden and with James M. McNamara of Clinton as the first appointed agency coordinator, Region II Area Agency on Aging began offering an Information and Referral Service to seniors throughout the region’s cities and towns.

A more enhanced Information and Referral (I&R) service was established at the Agency in 1985. The Board of Directors, now with 17 members, changed the Agency’s name in 1989 to more accurately reflect our planning and service area of sixty-one communities in Central Massachusetts. In 1990, the Central Massachusetts Agency on Aging, Inc. (CMAA) moved its offices to West Boylston.

In the late 1990’s, the Central Massachusetts Agency on Aging developed an online presence with the launch of the SeniorConnection website. During the 2000s, CMAA began to refocus its outreach efforts to use existing technology to its full extent. Expansions to our website and the use of social media have helped bring the Agency into the digital world. At the same time, CMAA continues to offer information to consumers by phone, email and in person keeping close to our mission. In 2019, Dr. Moses S. Dixon became the President & CEO and in 2020, CMAA moved to its current location in Worcester at 330 Southwest Cutoff. We are excited to continue growing and serving our region to support the needs of older adults and caregivers.